I vividly remember our first trip to Amsterdam in The Netherlands. Having read about this spot in travel books, I was well aware that the denizens of this fair city liked to travel around on two-wheel bikes.

Even so, I wasn’t prepared for the sheer mass of humanity on bicycles. At one point we actually stood on a busy street corner and watched as the light changed from red to green and, like an invading army, hundreds of cyclists barreled ahead. There were no cars in sight. 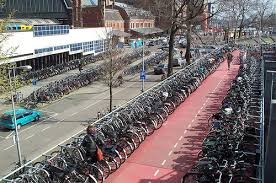 Biking in Amsterdam is, by far, the most popular and efficient way to get around. In fact, this city is known as one of the most bicycle-friendly spots in the world. There are roughly 750,000 people in Amsterdam and, on average, half of the city’s population rides a bike at some point every day. The average distance traveled per person, per day is 1 1/2 miles.

There are bike racks everywhere, and 250 miles of bike lanes, which usually run along the right sides of streets and feature white lines and bike symbols painted on the road itself. The bike traffic lights (red, yellow and green in the shape of a bicycle) are at most major intersections. 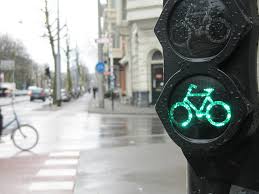 On Monday, May 27, 2013, the biggest bicycle-sharing program in the United States was launched in Manhattan (population 1.6 million). It was introduced as a “new form of public transit” and the privately financed program — called Citi Bike, after lead sponsor Citigroup Inc. — kicked off with 6,000 bikes at more than 300 stations.

A cyclist can unlock a three-gear, cruising-style bike from any station, take it for a ride and return it to any rack. “We now have an entirely new transportation network without spending any taxpayer money,” says Mayor Michael Bloomberg.

Launching this endeavor took three years of planning and 400 community meetings to decide where to put the racks. Even so, the roll out hit some bumps: most notably Superstorm Sandy.

Subscribers pay a $95 annual fee for unlimited rides of 45 minutes, $10 for a 24-hour pass and $25 for a seven-day pass(both allow for an unlimited number of 30-minute trips). 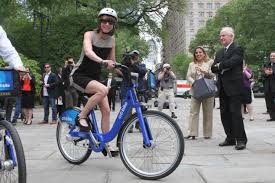 What Do Both Cities Have In Common?

Because bike ownership is high in Amsterdam there is no “bike sharing program” like Manhattan. However, the two cities share certain similarities.

In both places, bike thievery is high. In Amsterdam there are about 1,000,000 bicycles in the city and 100,000 are stolen yearly. And, believe it or not, 25,000 end up in the city’s 150 canals. (I believe it after seeing a waiter at an upscale restaurant throw an empty wine bottle into the canal.)

On the other hand, Manhattan is widely regarded as the nation’s bicycle-theft capital. It’s no accident that Kryptonite’s signature bike lock is called the “New York Lock” and is described as the lock that “resists bolt cutters.”

In spite of the above, a bike is still a quick, efficient and fun way to get around.

This entry was posted in New York, the UK. Bookmark the permalink.