/ THINGS WE LOVE: The Lucky Frog

The Lucky Frog is found in all STC offices worldwide. Why does this endearing creature have a home with us? 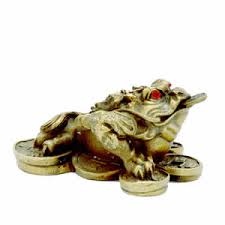 STC was started 20 years ago by Sophie Ann Terrisse, as many of you know. When asked, she relates this interesting backstory about our ubiquitous frogs. “I was in a shop and I stumbled on a frog that was sitting on the floor,” she says. “The proprietor quickly informed me that this meant I would have good luck and gave me the frog as a present. I liked the idea so much that I began giving lucky frogs to others. I also decided to put one in each of our offices.”

So, what’s the story behind this rather benign creature who’s often called the lucky or feng shui money frog? To begin, feng shui is based on an ancient 5,000-year-old Chinese philosophy that encompasses the art and science of keeping one’s indoor environment balanced.

According to ancient beliefs, the feng shui money frog has symbolic roots. One reason “money or wealth frogs” are associated with money is that they are found near water — and water means wealth. Like many symbols in Chinese lore, the lucky frog came from a legend about a frog called Chan Chu who symbolizes both protection and good luck.

The Lucky Frog in New York is on our reception desk and can be easily seen when one steps out of the elevator and enters STC.

This Inspirational Saying, which is on a STC cork board, was created by Vivian Greene, a 34-year-old soul/pop singer and songwriter who is with Columbia Records.

It’s a wonderful message that has appeared on greeting cards as well as a number of inspirational products. In two short sentences, it says that sometimes it feels like we experience more storms than fair weather. So how does one cope when caught in one of life’s storms? Hunker down and wait for things to change? No.

A much better approach is to “learn to dance in the rain” or simply adjust one’s attitude. Every situation can be looked at from a positive or negative perspective. Thinking innovatively and finding purpose and value in the midst of difficulties and disappointments is the solution.

This entry was posted in india, New York, singapore, Things We Love. Bookmark the permalink.